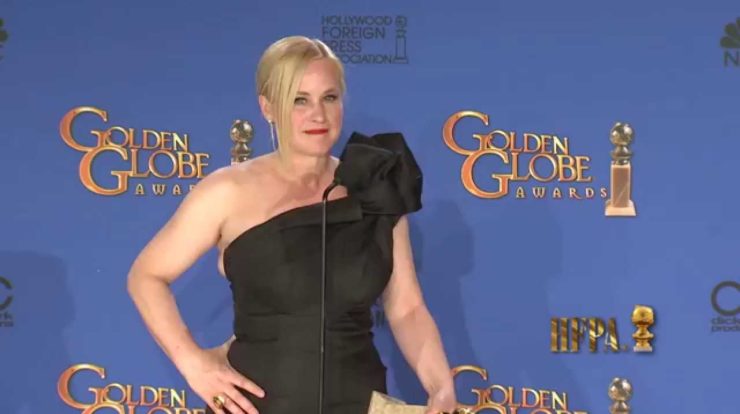 Patricia Arquette apologized for dropping associate F-bomb whereas acceptive her Golden Globe award for the lead player during a restricted series for Showtime’s “Escape at Dannemora.”

“I didn’t arrange that. it absolutely was random F-bomb,” she said. “I’m thus sorry.” She delayed her trophy and joked: “You can’t take it back, can you?”

Arquette won for her extraordinary performance as writer Mitchell within the true story of a lady UN agency helped 2 inmates stage a jail break in upstate big apple in 2015. Arquette gained quite forty pounds for a task that was something however glamourous.

“I felt thus free,” Arquette aforesaid. “I ne’er once detected this refrain that I even have detected thus usually in my career — ‘Is she likable enough? Is she enticing enough?’”

Mitchell could be a massive lady UN agency was unabashedly sexual, that created the role appealing to Arquette. She echoed the calls of alternative Globe winners for the business|industry} to stay watchful in strain for diversity all told aspects of the biz.

“ I’m glad to ascertain a number of these films being given opportunities,” she said. “Hollywood perpetually responds once they see such a lot revenue returning from it. Diversity is getting down to pay off for Hollywood.”

Arquette aforesaid the main focus on pay and gender parity ought to extend on the far side Hollywood. She aforesaid she’s inspired by the wave of ladies legislators elective in recent months at the state and federal level.

“We have heaps of moms out there UN agency ar sole breadwinners or primary breadwinners for his or her families,” she said. “We have to be compelled to verify civil right and equal pay. I’m excited concerning what number we’ve returning into the House.”

Although Arquette had been appointed on the tv aspect of the Globes ballot 3 times before (for her star role on the broadcast drama “Medium,” consecutively between 2006 and 2008), this was her 1st win for a small-screen role. Arquette has another nomination and wins from the film aspect of the ballot (for “Boyhood” in 2015).