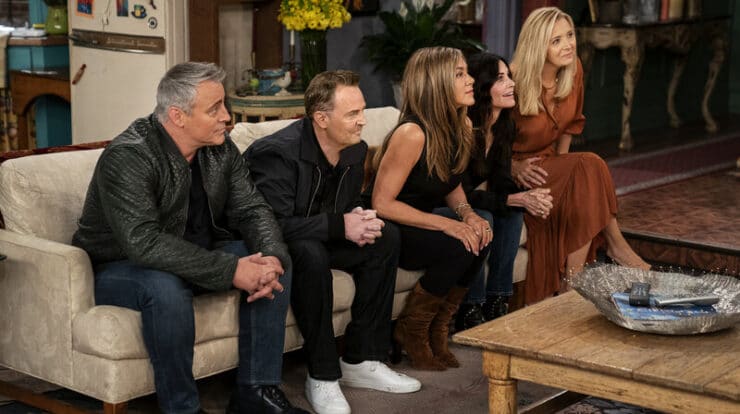 There’s a magical moment, three minutes into Friends: The Reunion. It’s blink-and-you-miss-it—a wordless glance. But in it lies the solution to the age-old question: What the hell is it about this show? How features a straightforward NBC comedy that premiered nearly thirty years ago blown up into a worldwide cultural phenomenon that is still not only relevant but adored? It happens when Matt LeBlanc arrives to satisfy his co-stars on their old set. He wraps Lisa Kudrow during a big bear hug (“Look at you!” “Look at you!”) while Jennifer Aniston and David Schwimmer look on within the background.

A tearful Aniston, standing within the background, turns far away from the camera to seem at Schwimmer—*Can you think this?—*who returns her gaze with an almost pained smile and a tilted shake of the head: I do know. That right there, is what keeps this show alive, in spite of everything (its age, its dated style, its problematic and outright offensive elements). Everyone wants to believe the actors on their favorite show are literally friends in real life—that the fun they’re having is real.

It’s fantasy really but the cast of Friends really were good friends. because the show’s creators pitched it, Friends was about, “the time in your life when your friends are your family.” That daunting era of early adulthood, when careers and relationships and basically everything but your friendships seem uncertain. These actors, like their characters, lived through that point together under a huge spotlight, no less. The six of them just clicked, and therefore the real-life kinship that they had off-screen infused their fictional friendship with bright, crackling chemistry. Twenty-eight years later, they’ve still got it.

One element of the reunion has the actors doing table reads of a number of the show’s most famous scenes, including the one where Ross and Rachel have an argument that results in their first, passionate kiss. I felt myself blushing while watching the segment, and wasn’t sure if it had been thanks to the awkwardness of watching two fiftysomething actors sitting at a table, reenacting a scene written for immature, high-drama twenty-year-olds, or because a part of me hoped they’d leap up from the table and figure out again. What makes it more exciting is Aniston and Schwimmer’s revelation that they did indeed have real-life chemistry and sexual tension throughout the primary two seasons, though they never managed to urge together (allegedly).But that’s what all reunions are: a really awkward, sentimental ritual where we entertain old crushes, shake our heads at our silly younger selves, and wallow in bittersweet nostalgia.

We reminisce and cringe, and tell stories everyone knows already. If you’re going into this expecting bombshells, you’re getting to be disappointed. But if you enter as a seasoned Friends fan, you’ll have a blast. The reunion features a lot in common with the show itself: It’s absolutely full of big-name guest stars—some so huge that they don’t quite add up (Malala! Who saw that coming?!). There are many solid laughs (I defy you to stay it together watching Lisa Kudrow break during the blooper sequence) and a few parts that just didn’t get to be there (the fashion show, James Corden). Jennifer Aniston cries tons. And as ever, the simplest parts are those where it’s just the six of them, sitting around Monica’s cocktail table, talking. the sole dirt dished is that the Schwimmer-Aniston crush—and while it’s thrilling to listen to them mention it, it’s pretty benign as far as gossip goes.

This Friends reunion comes as advertised: No controversies; many hugs. And Friends is vanilla—by which I don’t just mean extremely white, though absolutely that too. many a critic, myself included, has banged their head against its marshmallowy surface to undertake and explain why something so edgeless works so well, but at a particular point, one just has got to concede, some things just taste good. The Reunion is nowhere near as yummy, but it goes down fine.

Insofar because it has any perspective on the persistence of Friends as a cultural phenomenon (which it mostly doesn’t), the reunion’s position is that it comes right down to casting. The special circles back again and again to the excellence of the show’s six actors and their rapport, effectively blurring the road between the characters and therefore the people playing them. Jennifer Aniston, Courteney Cox, Lisa Kudrow, Matt LeBlanc, Matthew Perry, and David Schwimmer aren’t Rachel, Monica, Phoebe, Joey, Chandler, and Ross, but the reunion accentuates the way that playing the latter forever linked the previous, such watching either is quite like watching both. James Corden, gormlessly hosting a gussied-up discussion, at one point remarks that one among the actors said something “exactly like” their character—which is, of course, just how they talk.* the sole new piece of data “revealed” within the special (and honestly, as a Friends head from way back, I desire I read this during a magazine feature decades ago) is that Aniston and Schwimmer had crushes on each other early within the series’ run, feelings they channeled into Rachel and Ross, which only further accentuates the porousness between characters and actors. This overlap is additionally the source of the foremost emotional thing about the reunion: the relentless passage of your time.

It is often rude and uncouth to remark on famous people’s faces, but forgoing it during this instance would go away critics within the strange position of not having the ability to write down about the primary thing anyone watching will notice. even as there was a built-in poignancy within the Harry Potter movies of watching children age ahead of your eyes, there’s an identical, if darker poignancy in watching adults age, or fight aging. because the reunion flits between the past and present, it’s finally the actors, not the characters, who are a bit like us. they need to be aged, while the characters remain within the bloom of their youth. Despite running nearly two hours, the reunion never settles on anything long enough to travel deep. It flits from one thing to a different, giving various guest stars and famous people brief cameos, and sticking to hagiography, including an extended clip reel of individuals expressing how Friends truly saved their lives.

The simplest cameo is probably Lady Gaga singing “Smelly Cat” with Kudrow, because Kudrow does it in character as Phoebe, and shoots Lady Gaga a deeply unimpressed glare when she finishes singing. The weirdest cameo possesses to be Justin Bieber’s walk-on during a Friends fashion show, wearing Ross’s potato Halloween costume. There are absolutely zero-pointed questions and really little back and forth. most are in reminiscence mode, primed to cue up clips from some old episode.